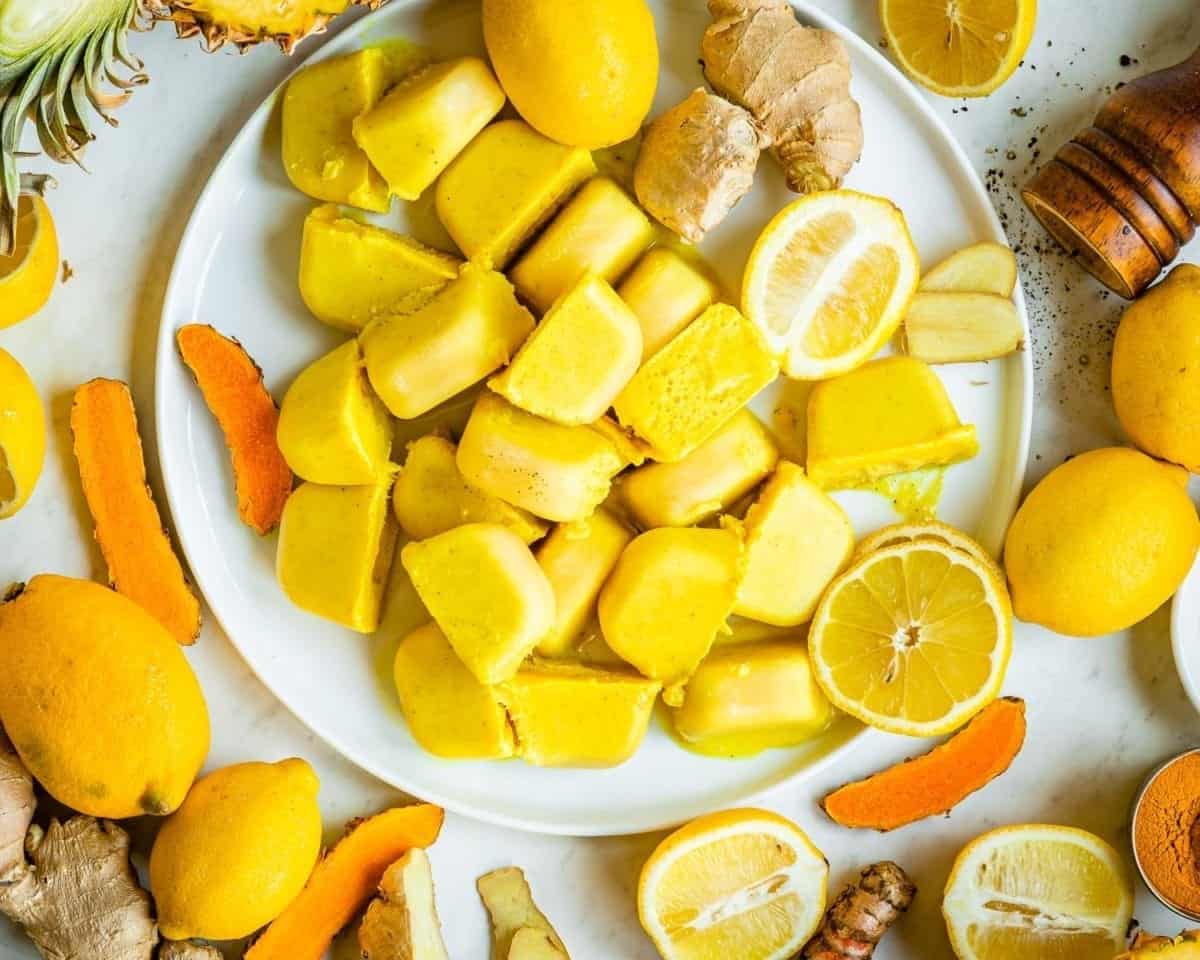 These Anti Inflammatory Turmeric Smoothie Cubes are intended for those fighting problematic inflammation and pain. They are made with plant-based ingredients that contain naturally occurring anti-inflammatory compounds, vitamins, and minerals. Read more below for an explanation of inflammation and how to fight it when needed.

Inflammation is a buzzword these days, but what is inflammation exactly? In reaction to a stimulus, the body’s normal and healthy response is inflammation. The inflammation may take the form of a skin rash, sore or swollen joints, redness, tenderness, fatigue, and an increased susceptibility to illness.

Inflammation-causing stimuli includes allergens in the external environment whether touched, inhaled, or consumed. The body recognizes the allergen(s) as an invader and responds accordingly. Other stimuli come from physical damage such as a burn, cut, or bruise. Autoimmune diseases result in inflammation caused when the body doesn’t recognize itself and treats the body as it would an invader.

Not all inflammation is bad – it’s actually a good thing our bodies elicit inflammatory responses because that’s how the body heals itself. It’s when there is an excessive response where the inflammation gets out of hand and causes issues of its own.

The body’s mechanism for fighting off an invader is to increase blood flow which brings red and white blood cells to the site, wherever it might be, and there is a release of histamine.

Histamine is a compound cells release in response to an injury or in an allergic reaction. It causes contractions of the smooth muscles and capillary dilation – i.e. redness, swelling, itching, and more.

When you have an allergic reaction such as red and itchy eyes or a skin rash after a bug bite or exposure to an allergen or something you ate, a dose of antihistamines such as  diphenhydramine hydrochloride (or commonly known by the brand name of Benadryl), doxylamine succinate, or others are given to reduce the body’s inflammatory, or histamine response.

It gets tricky when the body doesn’t recognize itself as a friend and treats it like an invader. That’s called autoimmunity. Many autoimmune conditions reflect that self-attack such as skin rashes and other conditions, achy joints and muscles, fatigue, digestive issues, nerve problems, and more. The most serious autoimmune conditions are those where the body attacks organs or organ systems that help keep us alive – nervous, digestive, etc.

Inflammation due to autoimmune disorders makes life miserable for those who suffer with the conditions. Supplementing with anti-inflammatory foods and medicines can help calm the autoimmune response.

One of the most powerful inflammation fighters is turmeric. Turmeric is a vibrant root that looks similar to ginger. It is usually dried and ground into a powder. Yellow curries get their hue from turmeric as does yellow mustard. It has a very unique flavor – somewhat bitter, but also kind of warm and spicy. Curcumin, a very powerful anti inflammatory and antioxidant, is the active ingredient in turmeric.

Because turmeric used as a spice doesn’t have huge amounts of curcumin, many people supplement to reap the important health benefits. We are of the opinion that including turmeric into your diet on a daily basis is a great protective measure, but certainly if wanting a natural alternative to a pain killer and such, a turmeric supplement will give you that extra boost.

In our recipe, you can use either fresh or dried turmeric. The amount listed is a suggestion, if you can handle more, go for it! Just remember to rinse your blender well so it doesn’t stay permanently yellow!

Ginger is also great for many things, including fighting inflammation. It’s probably one of those things you reach for when you’re digestive system is upset. Gingerol, a chemical found in ginger, and others provide protection against allergic reactions which may also treat or prevent allergic diseases.

In a few studies, a high concentration of gingerol significantly lowered blood glucose levels as well as overall cholesterol levels (including LDL “bad cholesterol”), increased good cholesterol (HDL), and lowered blood triglycerides levels. (source) So, ginger appears to be effective in the fight against diabetes when consumed on a daily basis.

Lemon juice is acidic, but when ingested, becomes an alkaline in the body. It can help reduce inflammation in several ways including reducing stomach acid (if it’s out of balance), and muscle and joint pain.

The chemical makeup of honey isn’t as simple as it seems. Water, sugar, and fructose mostly make up the essence of honey, it’s true. But other types of sugar don’t contain the rich mix of vitamins and minerals, amino acids, antibiotic substances, enzymes, and more.

Raw honey can also help fight inflammation due to the high levels of flavonoids and other polyphenols. Certain types of honey have even greater benefits such as manuka honey from New Zealand and Tualang and Gelam honeys from Malaysia.

Pineapple is high in vitamin C and bromelain, an enzyme with powerful anti-inflammatory properties that reduces swelling. Supplemental bromelain is particularly useful for reducing arthritic pain and improving knee function. The swelling of the nose and sinuses during illness or allergies may also be improved by supplementing with bromelain.

01
Top 7 green smoothie recipes OF ALL TIME!
02
HOW TO MAKE A MEAL REPLACEMENT SMOOTHIE
03
DIY FREEZER SMOOTHIE PREP ON A BUDGET
About Jen Hansard

Mom of 2, ran across the Grand Canyon and lover of smoothies, coffee & tacos. I transformed my family's health with a plant-based diet. I also found myself again along the way.

Our website hasn't been evaluated by the FDA and is not intended to diagnose, treat, prevent, or cure any disease.